Dyspnea: When to blame (and repair) an elevated hemidiaphragm

A 60-year-old man with multiple co-morbidities presented for evaluation of dyspnea. Symptoms were slow and progressive, and he now struggled to swim or tie his shoelaces. A left- and right-heart catheterization was performed prior to presentation due to his history of nonischemic cardiomyopathy and were without coronary disease or pulmonary hypertension; his blood pressure and volume status were well controlled. Pulmonary function tests showed no obstruction and symptoms did not respond to bronchodilators. A CT of the thorax did not reveal parenchymal lung disease or pulmonary embolism but did note atelectasis at the left lung base.

Patient had a long history of cervical spine disease and was now post C5-C6 discectomy and fusion. A CXR showed only an elevated left hemidiaphragm but a SNIFF test was nondiagnostic. 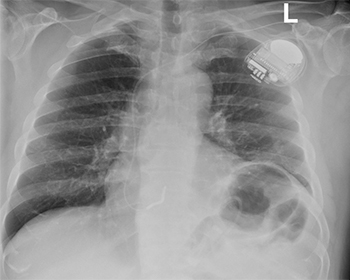 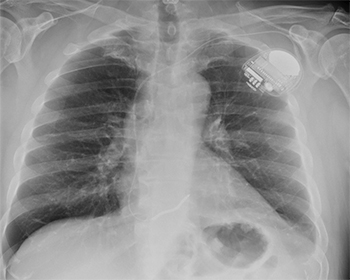 Respiratory muscle dysfunction, especially diaphragm dysfunction, is a well-documented source of dyspnea. Because of its nonspecific presentation, as well as difficulty in obtaining adequate testing, assessment of respiratory and diaphragm muscle function is often neglected or incomplete.

Chest radiograph is a commonly ordered test in the evaluation of dyspnea. The high sensitivity (90%) makes it a reasonable screening tool for diaphragm dysfunction. However, its lack of specificity and low positive predictive value (PPV 33%) precludes the diagnosis of diaphragm dysfunction and does not provide quantitative assessment of function and relative contribution to dyspnea. Etiologies of “false” diaphragm paralysis must be assessed and ruled out through physical exam, and spirometric and radiographic testing. In some cases, measurement of transdiaphragmatic pressures becomes necessary to confirm the diagnosis.

Diaphragm plication is a well-established procedure for unilateral diaphragm dysfunction and or paralysis. During plication, the diaphragm is immobilized, preventing paradoxical motion and thus improving ventilation. Plication has resulted in improvements in both dyspnea and quality of life scores as well as providing an objective improvement in lung function, results which have proven durable in subsequent long-term follow-up.