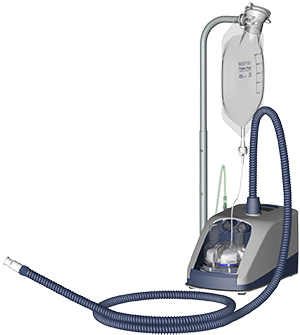 A pilot study at Temple suggests that daily use of humidified nasal high-flow (NHF) therapy with an air-oxygen blend as a maintenance therapy could benefit patients discharged from hospital after an acute exacerbation of COPD.

NHF delivers humidified nasal gases to patients who are breathing on their own. For patients with COPD, hypoxemia, and/or hypercapnia, NHF may make breathing easier, reduce shortness of breath, and help keep airways moist. It may also improve gas balance by reducing CO2 levels. Maintenance use of NHF could be an important way to ameliorate COPD symptoms and help slow disease progression. Yet, once the patient is discharged from the hospital, we have little data about whether it is easy and effective to continue this therapy at home.

Temple’s pilot study examined the feasibility of a larger-scale trial of NHF as at-home therapy for patients with chronic gas exchange issues. The study (called “Sleep and Daytime Use of Humidified Nasal High-Flow Oxygen in COPD Outpatients,” NCT03221387) followed 28 people who had been hospitalized within the previous 6 months for acute COPD exacerbation. Patients used the AIRVO™ 2 system nightly, after being trained on how to operate and maintain it. The system is designed to be
portable and user-friendly.

Out of 26 patients who reported back on day 70 of the study, 23 reported improvement in dyspnea (8 reported marked improvement), while 3 patients had no change. No patient reported worsening dyspnea using NHF. Over time, daily use of NHF appeared to reduce sputum quantity and viscosity, cough, and wheeze among 10 patients who used an electronic daily diary to measure symptoms. In addition, 5 (out of an initial 9 selected) of the trial participants completed a series of three sleep studies; they showed no significant change in sleep measures, including breathing/apnea, nocturnal oxygenation, and sleep quality, although other studies1 have suggested that high-flow nasal therapy reduces peripheral vascular sympathetic activity during REM sleep.

No patient reported issues with setting up or maintaining the AIRVO™ 2 equipment. Importantly for a daily therapy used while sleeping, no patients reported nasal pain, and average patientreported discomfort was minimal and did not escalate with continued use. All but one of the 29 patients who completed the trial chose to keep the AIRVO™ 2 device and continued using the equipment after the trial was over.

The results from the pilot suggest that NHF is feasible for daily use at home for 6 to 8 hours at a time and paves the way for larger-scale studies focused on outcomes.